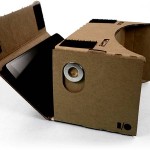 After Google Cardboard was announced at I/O back in June, we bought one for a prize giveaway at BrainBlast. As soon as it came, everyone in my office started experimenting with it and was immediately fascinated. For those who aren’t familiar, Google Cardboard is a cardboard cutout with two lenses, a neodymium magnet that acts as a trigger for input, and an empty space for your smartphone. With iOS or Android apps that provide a stereoscopic (side-by-side picture) view, looking through the lenses provides an easy-to-implement but very effective virtual reality experience.
Smartphone-based virtual reality has been around for awhile in the form of Durovis Dive and other do-it-yourself headsets, though I’d never really paid much attention, since the headsets were still fairly expensive. But after seeing Google Cardboard and realizing how inexpensive a virtual reality headset could be, I found myself thinking about the numerous possibilities it could bring for our teachers and students. For starters, the Cardboard app and Chrome Experiments released by Google have plenty to engage the imagination: navigating through Google Earth, seeing 360-degree videos, an animated short, and watching and exploring the virtual tour.
There’s a number of places to get a Google Cardboard headset, and Google lists a few on their web site. I can personally vouch for the quality of the Unofficial Cardboard headset at https://www.unofficialcardboard.com/products and you can buy a version that’s already put together for you, but if you’re crafty you can buy an unassembled kit and put it together yourself (it’s actually not that difficult).
The cheapest I’ve been able to find is at Tinydeal: http://www.tinydeal.com/diy-google-cardboard-vr-3d-glasses-for-iphone-samsung-cellphone-p-135220.html The price on this bounces around a bit, but usually it’s between $2.50 and $3.50. You can check back later and see if it’s cheaper, but I’ve bought 10 headsets off Tinydeal and they’re decent enough, but the magnets aren’t very strong so if you’re using it with an app it might not always detect the input. The eyes seem like they might be just slightly too far apart, too.
One of the coolest things that modern smartphones can do is capture photospheres using the Google Camera app for Android or the Photo Sphere Camera app for iOS. It’s similar to capturing a panorama with your smartphone, except you also capture photos above and below. The best way to take a good photosphere is to try to keep the phone in one place and pivot yourself around it as you snap pictures at every angle. If you have a tripod with a handle that can rotate it in every angle, that’s ideal. Otherwise, resting your smartphone on an object like the edge of a table or chair can give you fairly good results if you have trouble keeping your camera in the same position. Check out the collection of photospheres others have made on Sphereshare and the G+ Photo Sphere Community for some examples.
I created my own photosphere uploading and sharing web app (best viewed in Chrome) that you can use to easily share your photospheres, and view them with a Google Cardboard headset via the browser. You can also embed your photospheres as seen below. Try clicking and dragging to scroll around if you’re on a desktop. If you’re on a phone, you can rotate the scene by moving your device around. Click the icon in the bottom left to toggle between standard and stereoscopic/VR mode.

Upload or import your own photospheres at http://viewer.spherecast.org and view them in Google Cardboard.

This entry was posted by Justin Reeve on December 18, 2014 at 6:51 pm, and is filed under Miscellaneous. Follow any responses to this post through RSS 2.0. You can leave a response or trackback from your own site.