The Emotional Depth of Video Games 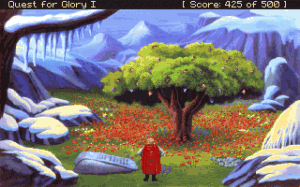 Watch the 2006 TED talk by David Perry shown below, and ask yourself if you’ve ever been emotionally impacted by a video game. For me, the answer is clear. I still reflect fondly on the hours upon hours I spent playing and replaying my old adventure and otherwise plot-driven games like King’s Quest, Quest for Glory, Indiana Jones and the Fate of Atlantis, Wing Commander, and others. I’ve always had an affinity for this type of game, where storylines drive the player to work their way through complex situations. Once the problems in the game are solved, the player emerges with very real feelings of satisfaction and accomplishment, knowing they have affected the progression of the story in some way, even if behind the scenes the game’s direction is more linear than open-ended. Often these stories convey very meaningful, thought-provoking, and emotion-evoking situations. I remember shedding a few tears at the end of Grim Fandango, and getting lost in the immersive worlds of Final Fantasy. As Perry says in his talk, a well-designed game will “seamlessly weave the user in the fabric of the virtual experience,” and that exactly what games have done for me.
This is an aspect which must drive how we design all educational games. Not necessarily to the point where students are sobbing uncontrollably while they play, but presenting them with the opportunity to totally immerse themselves in the game, and tapping into what makes games such a unique form of learning: their ability to dig deeper into our minds and emotions that traditional learning media cannot reach.

Gaming has shaped our culture, and how we see things. I identify with Michael Highland’s video shown in Perry’s talk, where he says, “When I’m driving down a road at sunset, I think this is almost as beautiful as my games are.” It’s been four years since I last played Oblivion, but every time I see a beautiful scene, such as fog covering the Wasatch Mountains, or the colorful landscape of Bryce Canyon, I instantly think, “This is just as beautiful as Oblivion.” Video games are adept at shaping and reprogramming our minds. The key is to use this for good, and use games to shape the brains of students in such a way that cannot be done with traditional media.

This entry was posted by Justin Reeve on February 2, 2011 at 11:24 pm, and is filed under Miscellaneous. Follow any responses to this post through RSS 2.0. You can leave a response or trackback from your own site.