I’m close to finishing an underwater simulation in OpenSim to help teach students about marine biology. I’ve been working on it for a couple weeks now, and it’s been interesting and fun to create. In this sim, students become underwater explorers. They board a submarine and take a trip to an underwater lab, which contains a classroom, observation rooms, and exhibits about marine life.
There’s two missions students will undergo. The first is to explore the ocean. After an orientation, students put on a deep sea diving suit and go out and walk around on the ocean floor, and participate in a scavenger hunt to locate, identify, and photograph different biological specimens using the viewer’s snapshot tool. The second mission involves the students creating their own posters about marine wildlife which are then added to the virtual world for the benefit of future visitors. Adventurous students may even be given the ability to texturize, script, and build their own undersea animals. This way, the sim will continue to build on itself as more students use it, and later visitors will enjoy the effort students have put into it. Since I hope to use this Underwater Observatory as part of a larger virtual world system in our school district at a later date, I believe it’s important to use a constructionist approach when designing our educational sims, where students are the main content creators rather than the teachers. Our teachers don’t have the time to create elaborate regions, so we need to encourage students to “Leave it better than you found it!” 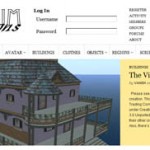 The amazing thing is most of this has been created with freebies. OpenSim has a constantly growing repertoire of good, free content available on the web, which I was able to use. For example, the undersea building itself was created with Tube City. Much of the plant life and some furniture is from Linda Kellie’s collection, and some other components are taken from Universal Campus. There are other pieces from OpenSim Creations, too, and a lot of the details I created myself, such as the lights, the diving suit, the fish swimming around, and the squid. There are some other little easter eggs as well, such as a treasure chest and a shipwreck which the students may come across, and the squid will [harmlessly] follow around anyone who comes within 20 meters.
I’ve been trying to get Ferd Frederix’s blue whale to work in OpenSim, too, but have been having limited success. Apparently sculpties can’t use the llMoveToTarget() function in OpenSim yet. But normally this would be one of the other reasons OpenSim is such a great choice as an educational virtual world: there are thousands of free LSL scripts for Second Life, and most of them work quite well in OpenSim. Since teachers and students may not have the time to become master scripters, there’s often a script for anything they need that they can just “plug in” to what they create. There’s also plenty of tutorials to help those interested learn how to do it.
There’s still a few things I want to add, and I’d like to fill out more of the rooms because some of them feel a little empty. I still haven’t created a decent submarine to take students to the lab. I was originally going to use Garry’s Beaumont’s fantastic Submarine Nebuchadnezzar, but I’m taking a crack at building my own. Vehicle support is limited in OpenSim due to the physics engine, but I think I can come up with something that works decently enough.
As soon as the sim is finished, I’ll post the OAR files for download here.
UPDATE: 2012-02-27 – I’ve thrown up a few more photos of the work, including the vehicles created for the sim. The Deep Sea ATV is quite fun, but needs a more open space to really go wild. To reach the observatory I ended up deciding to give each student their own “personal submarine” that works as an attachable vehicle, rather than a single giant submarine to take everyone there. I did this for a couple reasons. Although I’m packaging this sim as one region, for my own usage I’m going to plan on everyone traveling across a couple underwater regions to get to the observatory. Physical vehicles can’t cross regions, and I don’t want to force megaregions on the OAR, so an attachable vehicle was the best solution. Crossing multiple regions to get to the sim will help make the descent a little longer to build the anticipation, and help mask the fact I had to raise the sim’s water level higher than the rest of the grid. Plus it’ll be cool to see a fleet of mini-submarines swimming around.
I’m extremely close to being finished now, and have just a few things left to accomplish: Making sure my jellyfishes and squid stay within their boundaries, figuring out why my jellyfishes keep falling (even though their buoyancy should be set to keep them afloat), preventing the squid from flopping around wildly whenever it follows an avatar, and adding videos and informational material to the kiosks in the lobby.

This entry was posted by Justin Reeve on February 19, 2012 at 8:24 pm, and is filed under Miscellaneous. Follow any responses to this post through RSS 2.0. You can leave a response or trackback from your own site.